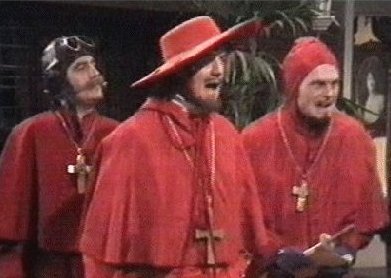 I can finally say I’m hip. I had a dish with quinoa in it last week. Now, if I were just to start watching Downton Abbey. ... Was on the river bank yesterday and four buzzards appeared and were flying low at various spots. One came straight overhead and then didn't make such a pass again. I think they were checking me out. "I don't think he's quite ready, Fred.

Give him a few more years" was the dialogue I imagined. … After endorsing torture in fighting terrorism, GOP presidential candidate Ted Cruz called for bringing back the Spanish Inquisition. Asked why, he said it was the element of surprise because “Nobody expects the Spanish Inquisition.” … Extra security is being hired for the upcoming Republican National Convention to protect the candidates for each other. … Someone asked if I agreed with the sentiments expressed in the rap song “Baby Got Back” (I like big butts). I said I was more into the Goldilocks approach. “Goldilocks?” a friend asked. “Yeah, not too big, no too small, but just right.” … If Donald Trump is elected president, he is expected to have the origins of his hair declared top secret. … I recently told my wife that when I get older, I might reach the day when she has to diaper and spoon feed me. She replied, “Well, the way you take care of yourself, that’s not a lot different than now, is it?” .. Sad to hear of the death of comedian Gary Schandling. I saw Schandling in Las Vegas in the late 1980s. Schandling said that when he drove to Vegas from L.A. “I like to practice by throwing money out the window while shifting gears.” … We’ll know our computer systems have been seriously hacked when we start to get electric bills with Beijing as the return address.