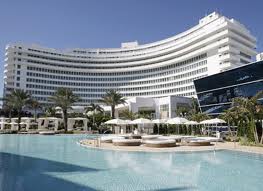 The Vegas casino-size Fontainebleau Hotel in Miami Beach, Fla.- where Thomson Reuters held its user conference recently- has an unusual set of names for meeting rooms – names like Ripple, Swirl, Facet, Bubble, Flash, Glitter, Glimmer, Slimmer. The Glimmer-Slimmer combination gave me a thought that will be familiar to Lord of the Rings fans, with the Deagol/Smeagol combination. "Would you like a room with two beds, my precious?"

... The names can also result in some embarrassing conversation about destinations for breakout sessions. "I'm going to Trickle." "Well, make sure you clean up after yourself."... I'm proposing to put up a new wing that's suited to Florida real estate with Swindle, Delude, Confuse, Tank and Befuddle. ... I'm not saying how big the Fontainebleau property is, but when I asked a staff member how far it was to the beach he replied, "We sent someone out yesterday. They'll let us know when they get back. It's so big I missed one session because it turned out the meeting room was in a different time zone. ... Toronto mayor Rob Ford explained his use of crack this week saying he was just doing all he can to support the concept of a Great White North. Meanwhile, city council members are urging the embattled executive to attempt to go over Niagara falls with or without a barrel. With the news sporting a probable fictional criticism of Ford by movie star Charlie Sheen, it's been announced Ford is a candidate for the Charlie Sheen Lifetime Award of Debauchery but needs to be seen with some lovely ladies before he can lock up the prize. Ford also seems a sure-fire bet for an invitation as a celebrity guest on "The Biggest Loser".