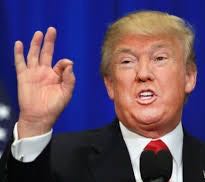 My wife got upset with me when she went, “I just broke another nail.” I replied “Why don’t have them all pulled if they are such trouble.”

I mean, I just don’t understand why she gets upset with me. … With most Americans accepting that former VP Joe Biden won the presidential elect, it’s time for Donald Trump to start thinking about his legacy. I am looking forward to the Donald Trump presidential library. I think it’s largely a pile of fast-food restaurant menus. Actually, the president de-elect seemed confused when asked about the library plans. He said he already had a card and couldn’t see why he would need another. … There’s a new TV crossover show being considered, “Queer Eye for the Klingon Guy”. It features hints on grooming such as how to be more stylish when disemboweling an opponent.  And with the latest Star Trek entry “Discovery” raises the question of why each succeeding series makes the Klingons uglier. The original series, the main distinguishing feature between the Klingons and Romulans was how they cut their eyebrows. … Once in a while, I click on corporate privacy statements for a change in reading. Sometimes, they can be a bit paranoid. The last one I read said, “Go away. Just leave us alone.” … Using a bit of oxycodone following my recent knee surgery. “It’s the effective, addictive so you can sleep medicine.”